How do CART models work

Example for the Binary Classification Problem

Classification and Regression Trees (or CART for short) is a type of supervised machine learning algorithm [1] that is mostly used in classification problems [2], but can be applied for regression problems [3] as well. It can handle both categorical and numerical input variables.

In this tutorial, we are going to go step-by-step and build a tree for the classification problem. A way to solve the regression problem will be discussed at the end.

Imagine that we have medical data about patients and we have two drugs (Drug A and Drug B) that work differently for each patient based on their health metrics. We have such data for 15 patients. Now, the 16th patient comes in and we want to assign a drug to him based on this information. You can load the sample data set here.

Our decision tree is going to look something like this:

In case you are wondering why is it called “a tree”, you have to look at it upside down:

Imagine that all our data is located at the root node of the tree. We want to split the data by most significant features (that will create new decision nodes) until we reach the leaf nodes with the most homogeneous target possible (ideally just one class is present in each leaf node).

The question is how do we split the data at each node?

The main metrics to use for dealing with classification problems when building a tree are Information Gain (IG) and Gini impurity. We are going to use IG for this example, however, Gini impurity will be also discussed at the end.

IG is based on the concept of entropy [4] and information content from information theory [5]. First of all, let’s build an intuition behind the entropy. Simply saying, entropy is the measure of chaos or uncertainty in the data.

Well, I hope that you would choose the unfair coin. In this case, you are more certain about the outcome of the coin flip (on average it will come up Heads in \(80\%\) of the time). For the fair coin, you have the highest level of uncertainty, meaning that Heads and Tails can occur equally likely. Probability mass functions for both coins look as:

We can calculate the entropy using the formula:

Entropy for the unfair coin:

As you can see, entropy for the fair coin is higher, meaning that the level of uncertainty is also higher. Note that entropy cannot be negative and the minimum value is \(0\) which means the highest level of certainty. For example, imagine the unfair coin with the probability \(P(\text{Heads}) = 1\) and \(P(\text{Tails}) = 0\). In such a way you are sure that the coin will come up Heads and entropy is equal to zero.

Coming back to our decision tree problem we want to split out data into nodes that have reduced the level of uncertainty. Basic algorithm look as follows:

We are going to split the data on training (first 15 patients) and test (16th patient) sets:

The initial entropy of the distribution of target variable (Drug) is:

For the next step, we are going to split the data by each feature (Gender, BMI, BP), calculate the entropy, and check which split variant gives the highest IG.

Let’s start with Gender. We have two labels in the data set: M and F. After splitting the data we end up with the following proportions:

Calculating the entropy for each gender label:

To measure the uncertainty reduction after the split we are going to use IG:

Now we can calculate the IG:

Repeat the previous steps for the BMI feature. We have two labels: normal and not normal.

And the same for BP column (labels are the same: normal and not normal):

As we can see BP gives the highest IG, or in other words, if we split the data by this column we will be more certain about the target variable distribution. So our first split will look like this: 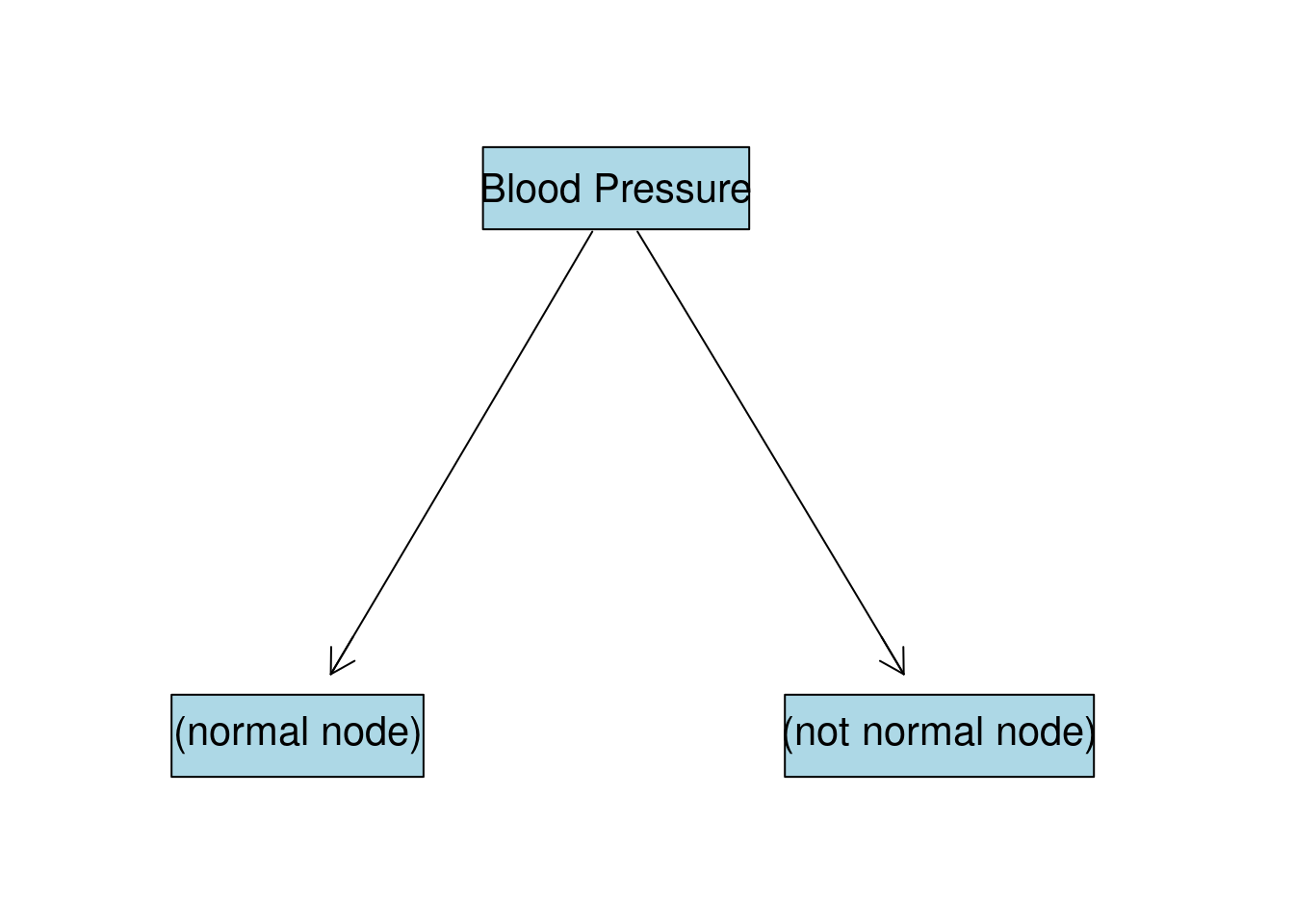 Continue to grow the tree down from the (normal node). We filter observations that have normal blood pressure:

As we can see, there is no Drug A for this node and entropy is already 0. This node is going to be last for this branch with the drug B as an output with probability of 1. We can also think about this in a way that for all subjects with normal blood pressure drug B worked best. 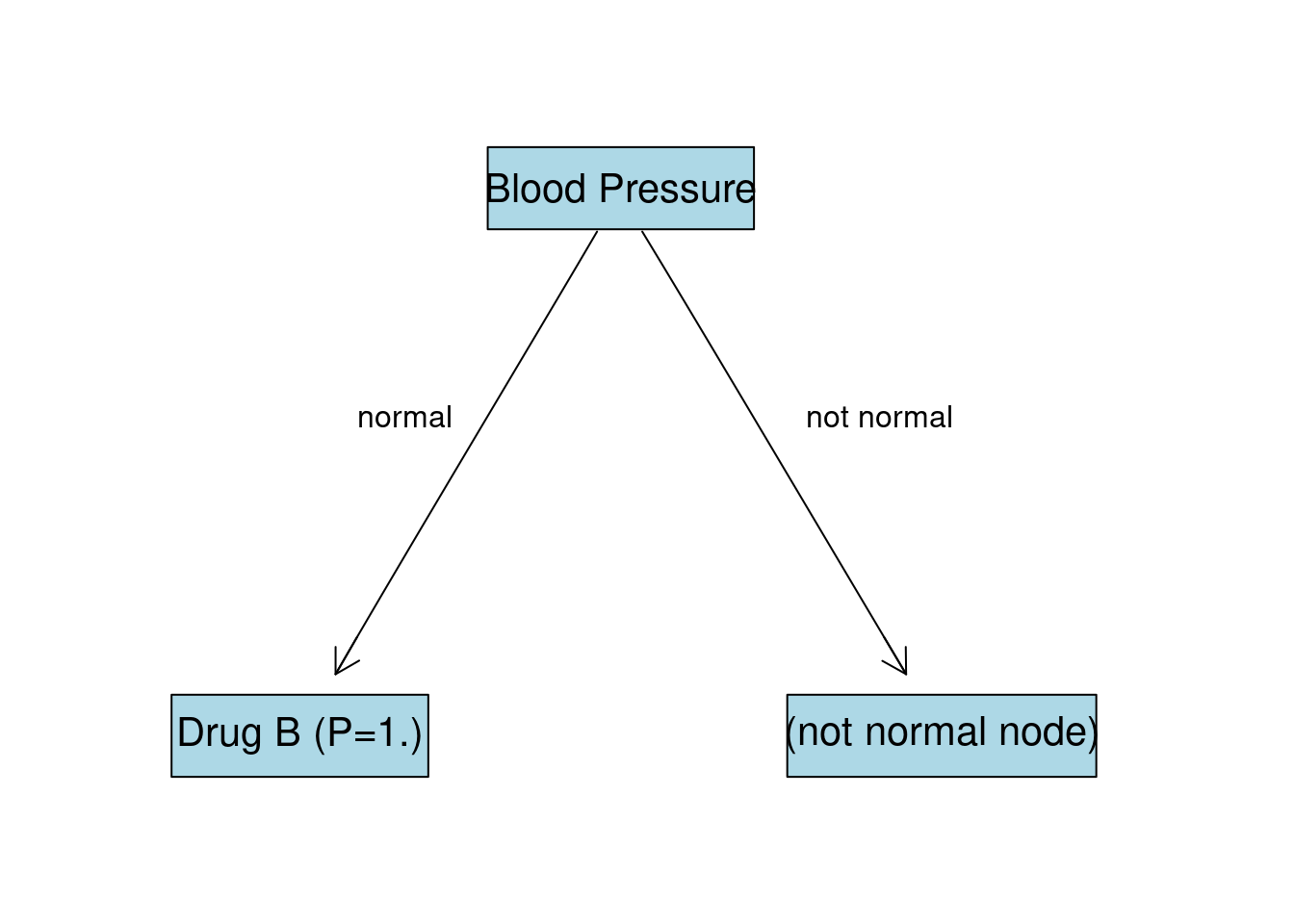 Filter all the observations that have not normal blood pressure:

Now we consider this set as “initial set”. The entropy of target distribution at this node is \(0.764\) (as we have already calculated it). At this node we have two features: Gender and BMI. We perform the same procedure to find the best splitting feature.

Gender gives the highest IG after splitting the data. Now the tree will look like this: 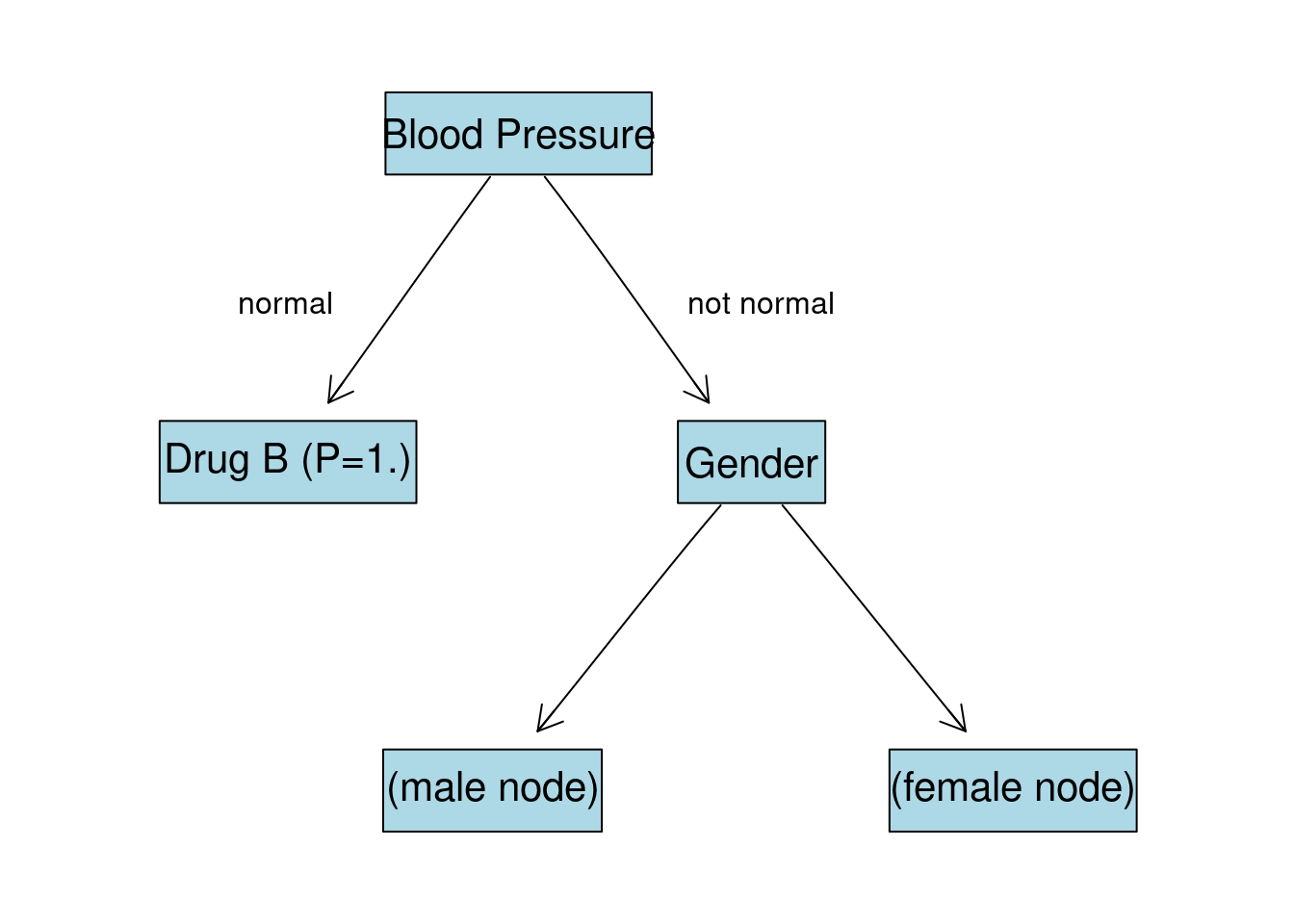 Now we filer the set so that we have only observations with BP:not normal and Gender:M:

There is just one feature left BMI. Since we have no more features apart from this one we are going to “grow” last nodes with BMI:normal and BMI:not normal labels:

For the BMI:normal node the predicted class is going to be Drug A, since its probability is higher. The same applies to BMI:not normal node. 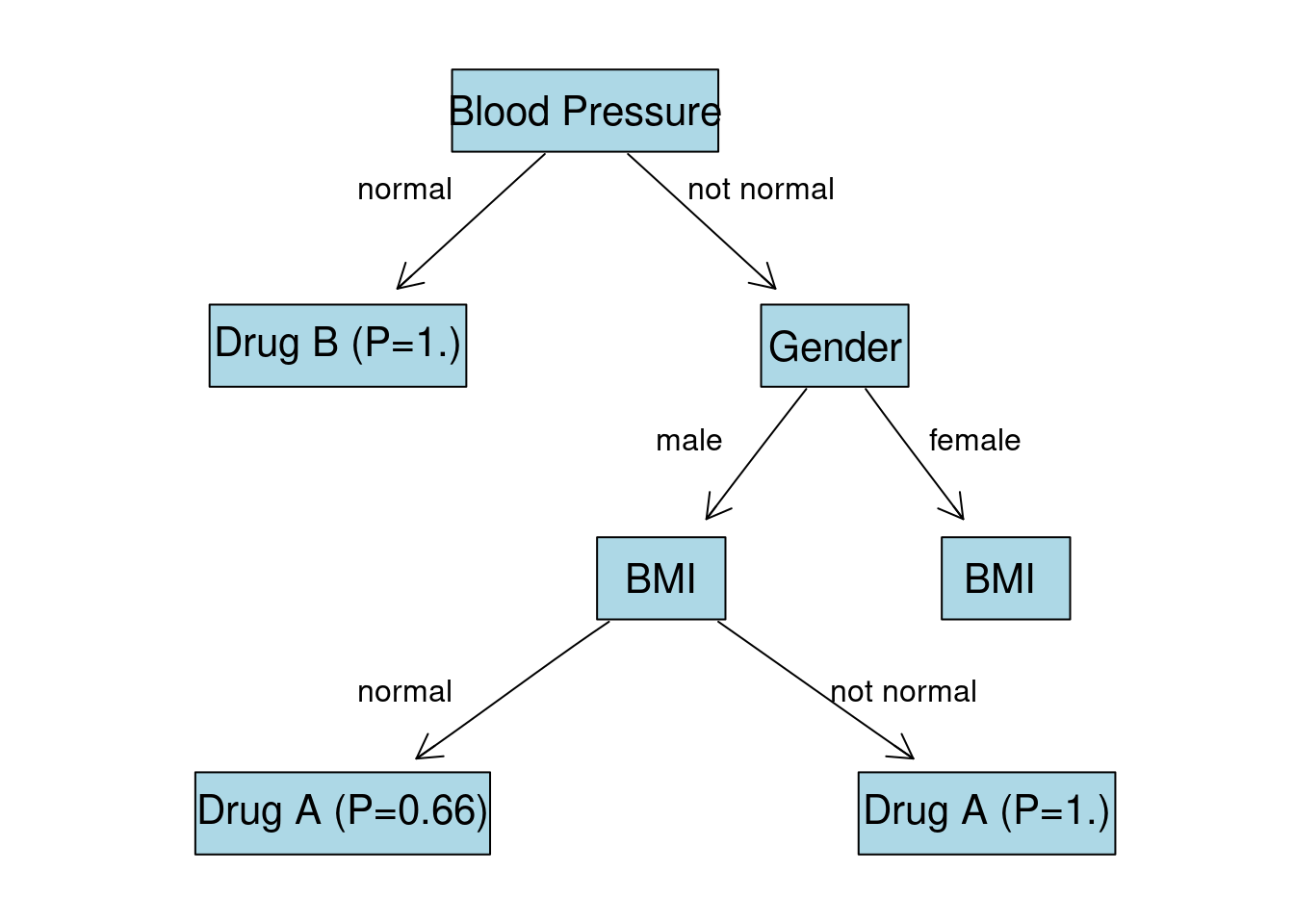 Now we filer the set so that we have only observations with BP:not normal and Gender:F:

Given all the calculations we visualize the final tree: 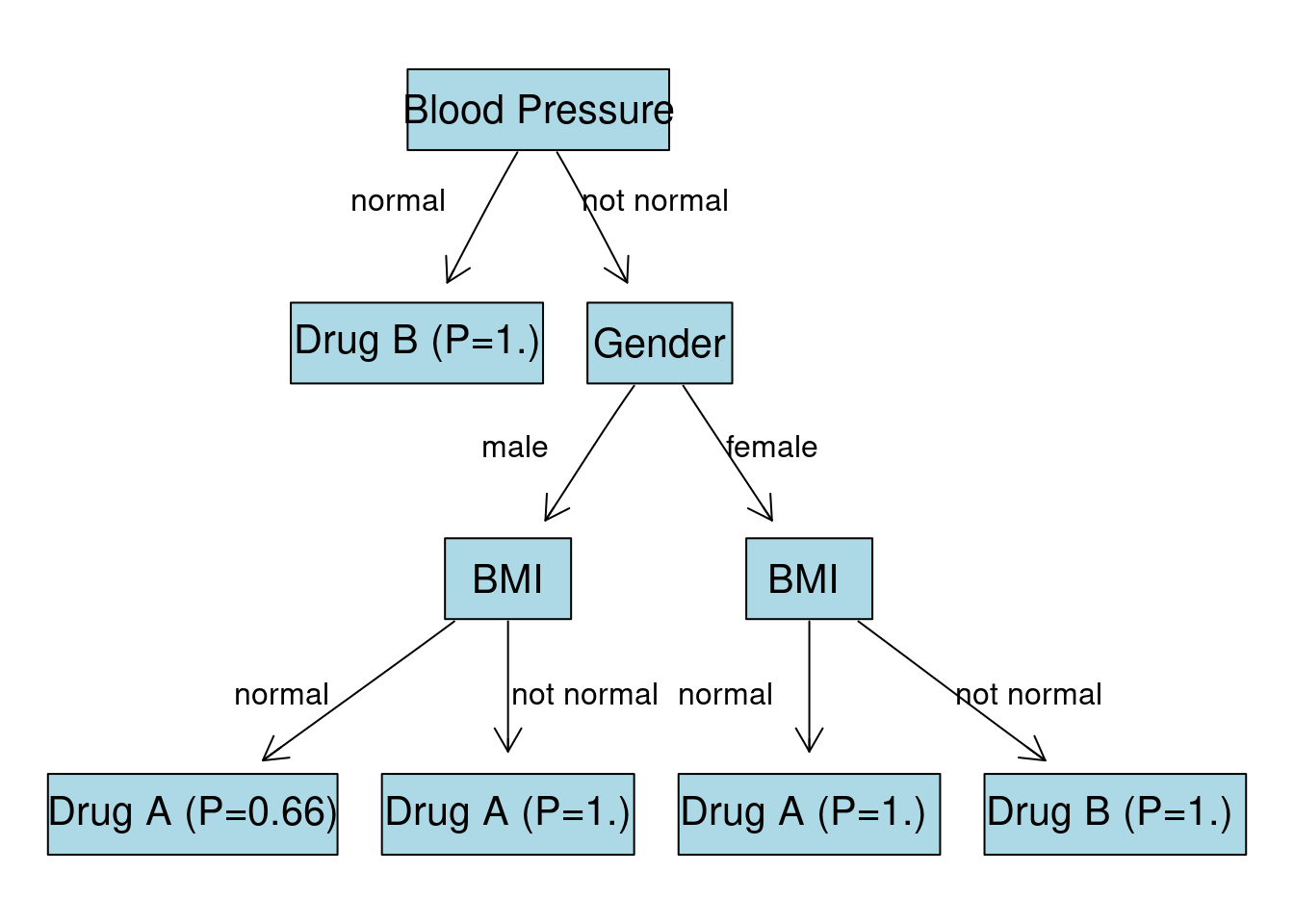 Let’s look at the 16th patient:

To make a prediction we just need to move top to bottom by the branches of our tree.

The predicted value is going to be Drug A with a probability of \(1.0\).

Let Computer Do the Math

We can build a decision tree using rpart function (from rpart package) and plot it with the help of fancyRpartPlot function (from rattle package). Note, that R doesn’t require the categorical variables encoding since it can handle them by itself. 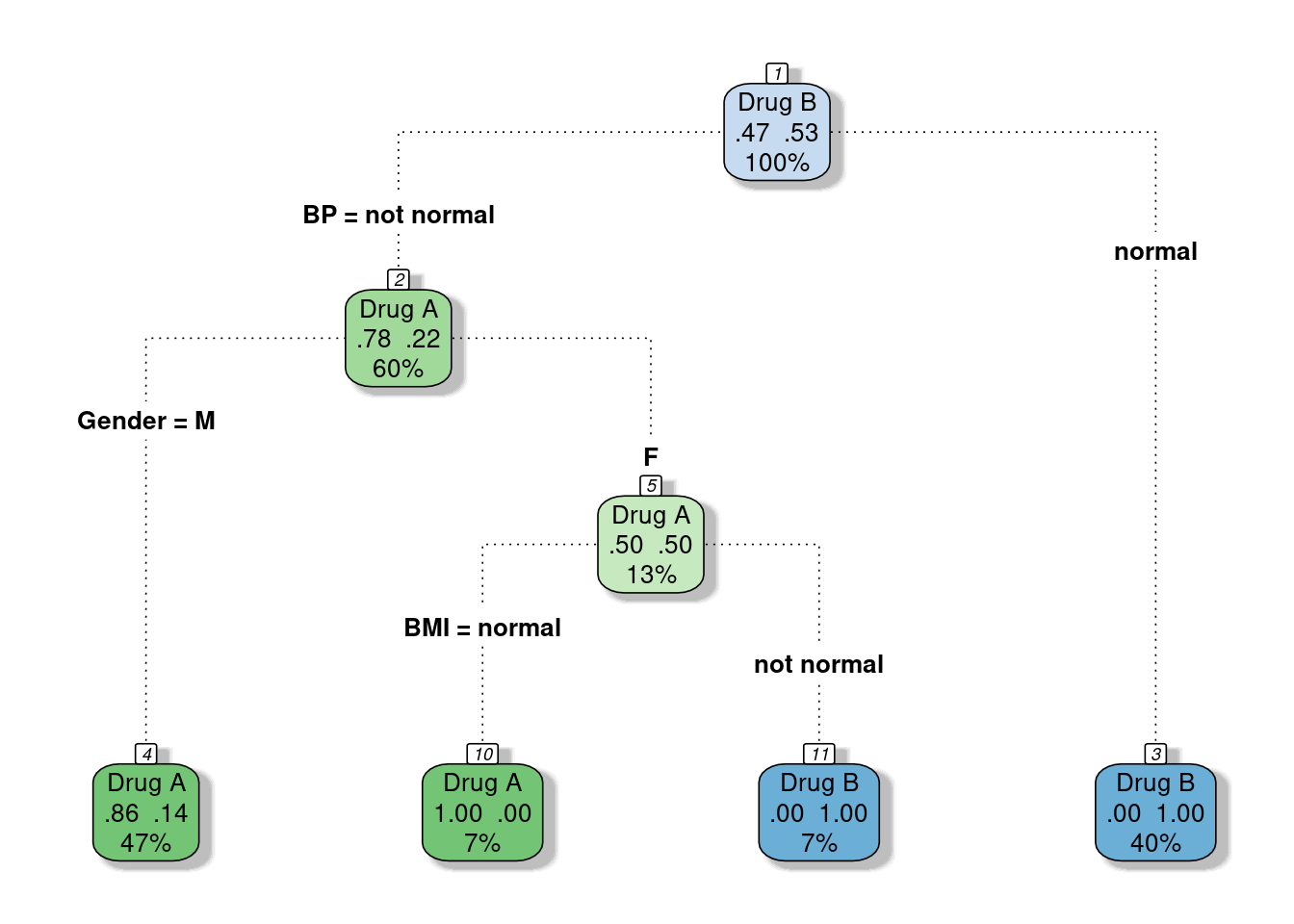 Get a prediction for the 16th patient:

Note that since R didn’t split Gender:M node by BMI the probabilities are quite different that we expected but it doesn’t effect the predicted class.

Unlike R, Python doesn’t allow categorical input variables, so we need to encode them:

To build a decision tree model we can use a DecisionTreeClassifier function from sklearn.tree module.

Get a prediction for the 16th patient:

In our sample data set, we had only categorical variables (with 2 labels each). But what would the model do, if we had numerical value as an input?

Let’s look again on the Python decision tree and its decision node conditions, for example, Gender_M <= 0.5. Where does 0.5 come from? The answer overlaps with the answer on how the model handles numerical input values.

Recall the Gender_M column we created for the Python train set. It consisted of two numerical values (0 and 1). What the model does is filter the data by the average value among these two numbers. Average value was: \(\frac{0+1}{2}=0.5\). Now model has two sets of data: one set that matches the condition Gender_M <= 0.5 (Gender is female) and the other set that doesn’t (Gender is male).

Imagine that we have added a third category Non-binary to the Gender feature. First, we would encode the values and create a new column Gender_encoded, which would have three numerical values (0, 1 and 2). Say, Non-binary = 0, Male = 1, Female = 2. Now model would have two conditions for filtering the data:

In a general way, we can say that if we have a numerical feature, the algorithm will convert it to “categorical” by choosing the average value as a threshold between actual input values:

As told before, for classification problems one can also use Gini impurity as a way to find the best splitting feature. The idea stays the same, but the only difference is that instead of the Entropy formula we are using the Gini formula:

\[G(X) = 1 - \sum_{i=1}^{n} p(x_i)^2\] After calculating the Gini impurity value for each feature, we would calculate the gain and choose the feature that provides the highest gain.

If we are dealing with the regression problem (predicting numerical variable, rather than a class) we would use the variance reduction. Instead of calculating the probabilities of the target variable we calculate its variance:

\[Var(x) = \frac{\sum_{i=1}^n(x_i- \bar x)^2}{n-1}\] And in the same way we are looking for a variable that has the highest variance reduction, or in other words variance in the target variable becomes lower after the split.

We have looked at the example of the CART model for the binary classification problem. It is a relatively simple algorithm that doesn’t require much feature engineering. With the small data set and lots of free time, one can even build a model with “pen and paper”. Compared to other ML algorithms, CART can be considered as a “weak learner” due to the overfitting issue. However, they are often used as a base estimator in more complex bagging and boosting models (for example, Random Forest algorithm). Additionally, CART can help with the hidden data patterns, since they can be visualized.